INCHEON, South Korea – After a major change to accommodate the International team, the outcome of the 2015 Presidents Cup came down to crucial putts on the 18th hole as the cup teetered back and forth between the U.S. and the Internationals all day on Sunday, but in the end it was the U.S. winning its ninth Presidents Cup 15.5 to 14.5 at Jack Nicklaus Golf Club Korea.

In one of the most entertaining matches in recent memory, the U.S. was in a pillow fight early and a dogfight late on Sunday, but when Korea’s Sangmoon Bae flubbed his chipped below the hole on the 18th, the Cup was securely in U.S. hands.

“Oh, my gosh, when we put him out 12th, had no idea obviously that that was going to happen,” Jay Haas said of his son Bill playing in the last position and clinching the cup with his win over Bae. “But he played beautiful, beautiful shots down the stretch, 16, 17, 18. I didn’t see the shot here at the end, how close it came. But just proud of all of them. Couldn’t even have dreamt this. I’m just real happy for the guys.”

The U.S. looked to have a solid lock on the trophy early on Sunday, beginning the day ahead by one and leading in nine of 12 singles matches at the turn, but the Internationals chipped away at those leads. Then, when it counted down the stretch, the Internationals took control by turning three of the first four matches that reached the 18th hole.

On the lone match that wasn’t turned, Bubba Watson missed a four-footer that cost the U.S. a half-point as he halved the match with Thailand’s Thongchai Jaidee.

“I hit a great shot, and then Teddy (Scott) had the putt read right and I said, I just can’t see it going that way.” Watson said. “He said, All right. I missed it and I already told Teddy he had a bunch good reads this week, and I just couldn’t execute.”

At that point, what seemed likely in the middle of the day, a U.S. victory, looked much in doubt as the Internationals on paper could win only its second cup ever.

Eventually the Internationals’ fortunes turned when American Chris Kirk drained 15-footer for birdie that forced India’s Anirban Lahiri to convert on his four-footer to square the hole and halve the match. But when the ball hit the hole and kicked away, the U.S. gained a full point and if all the remaining matches stayed as they were, the Americans would win, which they did.

“Purely just thinking, make it for the halve,” Kirk said about his thoughts before the putt on the 18th. “Obviously didn’t expect Anirban to unfortunately miss that putt. Hate to see that. Just trying to hit it like any other putt, hit the line and roll it in.”

The Americans improved to 9-1-1 overall at the Presidents Cup. With the closest Presidents Cup since the 2003 tie in South Africa, the Nick Price experiment of reducing the number of matches from 34 to 30 seemed to work, making the event more competitive and actually riveting down the stretch. 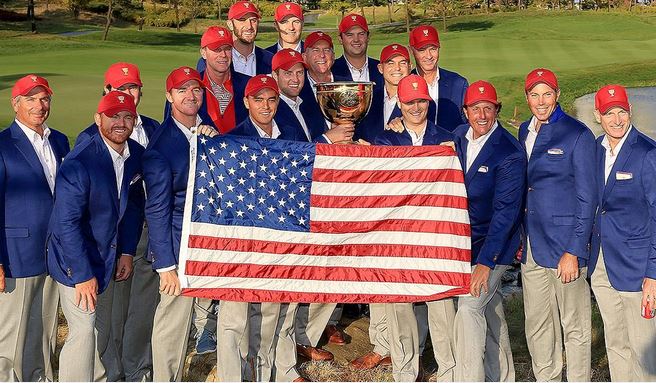